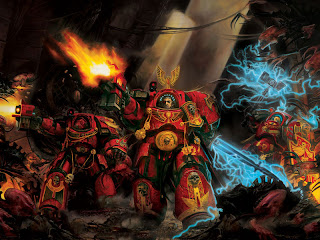 From the Games Workshop Newsletter:

The Blood Angels are one of the most popular Space Marine Chapters. They fought at the Emperor's side during the earliest days of the Imperium as one of the original Legions. Ten thousand years later, and one of the longest-running Chapters, they are still shaped by the deeds of their Primarch Sanguinius. Few Space Marine Chapters are as prolific and loyal in their defence of the Imperium as the Blood Angels, though a flaw in their gene seed makes them susceptible to the Black Rage and the Red Thirst - all-consuming curses that turn them savage and blood-thirsty in battle...

In February 2011, the Blood Angels will receive more reinforcements, including never-before-seen models - visit the website tomorrow for more information from the Studio in their Incoming! article. If you want to start massing your own Angelic Host, or are looking to bolster your troops, then here are some essential items to prepare for the new arrivals in February.

We definitely know that the Stormraven is a part of this release and a Furioso Dreadnaught seems to be a safe bet. There has also been talk of a Blood Angels Battle Force. I'm hoping for a new Dante and Mephiston, but I'm not holding my breath. What do you guys want to see?