This past Sunday the DED 'ARD Gaming Club got together at my house for some Holiday 40K action. We had 7 people show up and the following armies were presented: Imperial Guard, Tyranids, Ultramarines, Space Wolves, Orks, Chaos, and my Blood Angels. We ended up playing 3 games at once and the Orks player didn't show up until late so we didn't have anyone to log a concise Battle Report, but I'll briefly go over my games.

We played 1500 points and I managed to get 2 games in. If your curious what army list I used, you can check my previous post. The first game I played against Hive Fleet Legion which featured 2 Tervigons, 3 Zoanthropes in a spore, 3 Hive Guard, 2 units of 15 Hormagaunts, 2 units of 15 Termagants, and a Trygon Prime. We playing Capture and Control with 5 objectives and deployed as Dawn of War. It was my first time using Drop Pods and I made a fairly significant tactical error with my Drop Pod which basically bottle necked the rest of my forces. With my vehicles being fast, I was luckily able to overcome my tactical oversight. 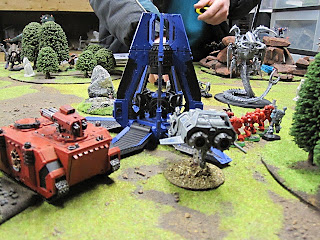 The stars of this match were my Land Speeders which toasted a ton of Termagants and Hormagaunts with their heavy flamers. The duds were my Death Company Dreadnaught which got blown up by the Zoanthropes as soon as the Drop Pod door opened and my other Dreadnaught with the twin-linked autocannons which didn't do much of anything.

This was a close fought game which went back and forth until turn 7. An unlucky perils of the warp roll by my opponent caused one of his Tervigons to die, and with no remaining Troops, turned a tie into a narrow victory for the Blood Angels.

Next up I played against the Orks. I'm not going to list everything that was in Rob's army, but it was a stupid amount of models. To say I was highly outnumbered would be a gross understatement. Take a look at the below pics which show my deployment and my opponents. And yes his models did stretch from one end of the 6x4 table to the other. His deployment took so long, I was able to run to Lowes and come back and he still wasn't done! 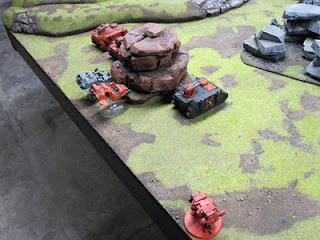 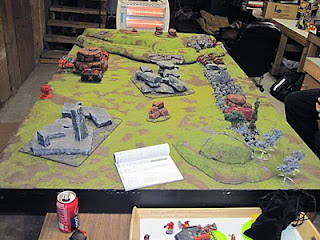 We ended up rolling Capture and Control with 3 objectives and deployed as Pitched Battle. This was another closely fought game and again my Land Speeders were the heroes of the match having barbecued a ton of Orks and took out his Truck and Looted Wagon. My Death Company Dreadnaught got some vengeance this game and cut down 16 of 20 Slugga Boyz in a single round of close combat with it's Blood Talons. His Ork Warboss with his unit of Nobs basically steamrolled most of my army taking out 2 of my Assault Squads and my Death Company with my Reclusiarch. I captured 1 objective with my sole surviving Assault Squad that came into the game late via Drop Pod and finally forced his Warboss and Nobs to flee due to concentrated fire from my Land Speeder, Razorback, and Death Company Dreadnaught. Another narrow victory for me and I went 2-0 on the day!

In hindsight, I'm really happy with how my army played. I was concerned that my Assault Squads wouldn't be durable enough, but with the addition of the Sanguinary Priests they performed remarkably well and lasted a lot longer than I thought they would. If there was one thing I wasn't happy with, it was the Dreadnaught with the twin-linked autocannons. It didn't make back it's points or serve any real purpose. In future lists I'll probably drop it out and add maybe a Devastator armed with Missile Launchers or a Scout Squad.

I'm off from school for 2 weeks so I should be able to post some more soon. I'll leave you with some additional pics from our get together. 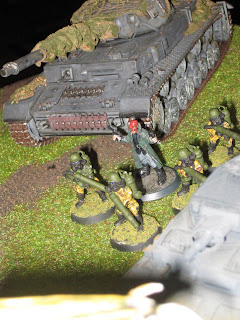 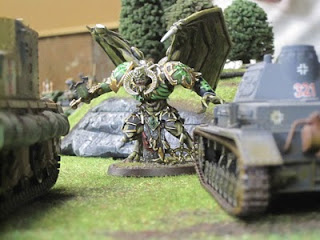 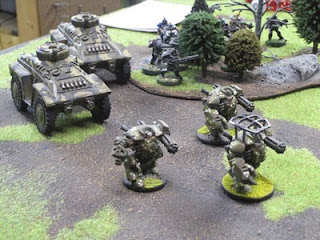 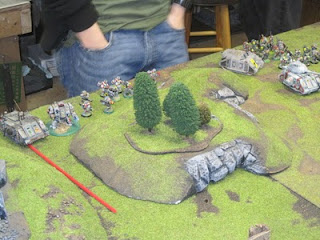 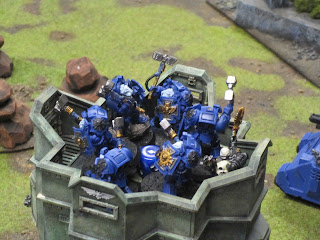