Recently I've been spending a lot of time with my Warp Spiders - hanging out at the beach, volleyball, all you can eat crab leg buffets, and the like, and it's been a fun time. Ever since I first heard of jump infantry in my neophyte days, I was smitten. I was warned though and told that they were never as good as they seemed, so I stayed away. From casual players to more experienced tournament players with an affinity for sci-fi testicles, there was a general advice of not going with the ever-so-cool looking jump packs. Well, then I started my CSM army (yes...I have more than just Eldar), and I decided that I really wanted to convert my own raptors, and that's when I began to think about how to best utilize these under appreciated unit types.

Moving infantry across the board without a transport is a bit taboo these days, and, honestly, I think for good reason. Without debating the finer points of foot vs mech, I think we can all see the troubles one may have with foot sloggers (save for Orks and Nids of course). And, as far as I'm concerned, jump infantry are basically foot sloggers that can move 12", so how are they best used?

For starters, don't lead with them. As a matter of fact, don't start them on the board. My experience has taught me that leading off with them, or even putting them on the board, immediately makes them a target. Jump infantry aren't usually strong enough to initiate an assault without support, or, better yet, should only really be assaulting to support another unit. Put them in reserve, but not to deep strike. Deep striking is just not worth all the trouble unless you have the tricks to make it work for you consistently. 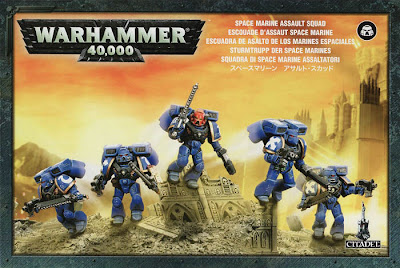 With the unit in reserves, you now have a contingency that can counter your opponents offense, or if you're ready to hit him where it hurts, send the infantry in to seal the deal and guarantee (as best as RNG will let you anyway :P) the victory. For my Eldar, the Warp Spiders have proven invaluable as far as clinching victories with their strong fire support. Often, they have even stopped an opponents offensive plans by coming in and popping a rhino, speeder, or similar, strength six fearing target. Warp spiders may seem unique in how they're nicely suited at dealing with both infantry and light armor, seeing as how the Eldar is an army of specialists, but they're still true to the Eldar methodology. Their specialty is providing rapid, ambush style supporting fire. They complement a bladestorm very well, and if you give your Exarch powerblades, you can probably take out a marine or 2 very easily if need be. And this is true for all units. I'm a big fan of dedicating your unit to a particular role, and when I get a little further along with my CSM, I plan on adding those raptors, 2 squads to be specific. One will specialize in anti-armor/MC combat with melta guns and a power fist, while the other will run flamers and lightning claws for dealing with infantry.

Not all jump infantry is made equal though. For example, gargoyles I'm just having a hard time making sense of. I'm sure more experienced Nid players can offer a simple strategy on how to use them. What makes them different is sheer size. You can afford to start off with these guys on the board as long as losses can be tolerated, but if you lose your synapse connection, you may just watch your entire unit go to hell because you've lost control of them, where reserves prevent this from happening, at least for a bit.

That's it for now. I'd love to hear your thoughts on jump infantry and whether or not you love 'em or hate 'em.