I've been doing this blog for over a year and looking back I find it pretty surprising that I haven't done any posts on terrain. I'm sure the other members of DED 'ARD are equally surprised considering how insane I am when it comes to making terrain. I'll admit, I'm somewhat of a terrain snob and nothing makes me lash out more than bad terrain. My devotion to terrain usually comes at the sacrifice of my models as you'll typically see primed red Blood Angels being pushed through lavish terrain when you play at my house. I know that defeats the whole purpose of why we game, but it is something I'm still working on. Anyway, building terrain wasn't the main reason why I got into the hobby, but it was pretty high on the list.

As a kid, I've always been amazed by model building and I used to look through old magazines on how they made models for movies like Star Wars, Indiana Jones, and Dark Crystal for hours on end. Alas, today a lot of the modeling craft has been replaced by 3d modeling, but I still love it and I was glad to see Peter Jackson go old school with The Lord of the Rings Trilogy. Not so glad with how he butchered the story and turned Frodo into an unlikeable ass, but that's a topic for another time. Today, building terrain and converting miniatures are my two favorite things with the hobby and terrain building is still something my wife really enjoys so I usually get her to help me out on my latest projects. Here's a few examples of some terrain we've made in the past. 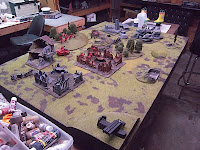 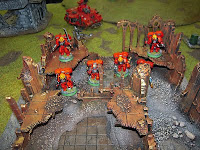 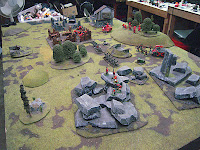 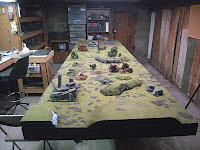 I'm going to be running a campaign for our Gaming Club starting next month. It's going to be based on Planetary Empires and everyone is going to be fighting over the planet Ghalis IV. The planet has been lost since the Dark Age of Technology and has remained hidden in the Ayntaara Nebula for thousands of years. Ghalis IV has remained untouched by the strife of the 41st millennium as no scanners or Psykers have been able to pierce the nebula's depths. This will be an escalation campaign with games starting at 500 point combat patrol matches as the armies make planetfall and escalate to 1,500 point games as they stake their foothold on the planet.

As you see in the pics above, my tables are kinda huge and really heavy. I made them years ago with 3/4" plywood and 2x4s. I'm replacing these with newer tables made out of 1/4" MDF and 1x3s. The tables are in two pieces one 4" by 4" for Combat Patrol and another 2" by 4" so I can make a tournament size 6" by 4" table. These tables are a lot lighter and easier to store.

In total, I'll have 3 tables. 1 grass board, 1 city board, and 1 desert board. Each of these will correspond to the tiles on the Planetary Empires sets we'll be using. I have the desert board painted and ready to go, but as of yet no terrain to speak of. Don't worry I'll have pics soon including a tutorial on making your own game table.

With the table completed, I did what I usually do. I scoured the internet looking for examples of cool looking desert terrain to draw inspiration from. Problem is, this time I came back pretty much empty handed. I would have thought with Tomb Kings just being released and Necrons on the near horizon there would be a ton of cool desert boards to get ideas from. Alas, there isn't much out there and the stuff I looked at was your basic rocks and tan colored hills.

So I'm not off to a great start and I sat in my basement for the past week waiting for inspiration to strike. I've got a spark thanks to my wife and I started working on a tar pit while she was doing a rock pile with a stone arch, but at this point that's not much. There's something about doing a desert board that just makes it harder to visualize for me. I can't quite put my finger on it, but I can definitely use some ideas from my readers. I really want the terrain on this board to be more than tan colored hills. I need stuff that is unique to the desert from a visual standpoint, but also allows new challenges on the table top.

So what do you guys think? If you were playing on a desert board what would you like to see that would not only look cool, but bring some unique terrain elements to the game. Please share some links and thoughts in the comments below. Hopefully I can get some ideas and put together a really awesome board. I'll be sure to share and do tutorials along the way.

P.S. Geek bonus points to the person who can identify where my terrain logo draws inspiration from.
Posted by The Harrower at 1:01 AM