Pics are starting to show up of the new Tactical Squad Boxed Set over on 4chan. The new Tactical Squad isn't a big departure from the previous one and that's a good thing in my opinion. It looks like there might be 10 unique legs per set as each of the legs in the pics above are different. I especially like the Grav Gun (second row middle) and the marine that's aiming (first row far right). I'm sure these aren't all the bitz from the kit as we are missing the other special weapons and this image of a Crimson Fist Marine reloading his bolter also showed up.

The below image was also posted along with the Tactical Marines, but I'm pretty sure this is a Sternguard Sergeant since he is carrying a Combi-melta. I think this model looks great, and I'm happy that GW is going for a slightly different look with the new heads. 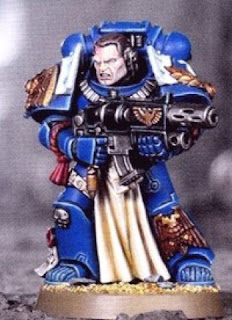 The flood gates have certainly opened and this definitely looks like Space Marines is going to be an amazing release. Can't wait till the new White Dwarf comes out so I can see more.