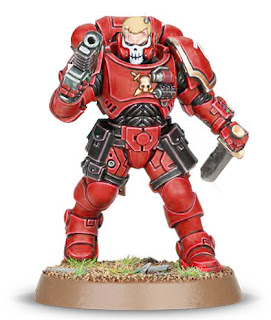 On paper, the Reivers look pretty good. 18 points per model in squads of 5-10 certainly isn't bad. They are 2 wounds and 2 attacks each like all Primaris Marines, and a max squad of 10 will be delivering 31 attacks at Strength 4 which is nothing to sneeze at. Shock Grenades are really good helping them to avoid Overwatch and making them harder to hit in the Fight Phase. They'll do great in melee if only they can get there and get off the charge... 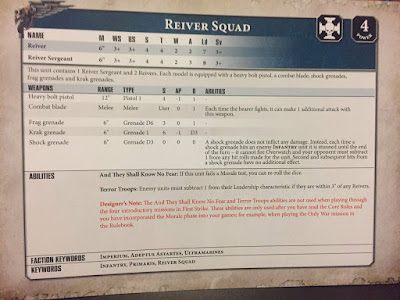 Which leads to my biggest gripe. It'll be hard to get these guys across the board without them getting shot off the table since they can't embark on any of the current Space Marines Transports. I was hoping for infiltration rules a la Scouts. This is a missed opportunity if you ask me. Granted, they'll eventually be able to embark in a Repulsor once it releases, but it's my understanding that is akin to a Land Raider so it'll be super pricey. Maybe they'll get some other type of deployment abilities when the Space Marines Codex drops (like grav chute insertion from the rumored Primaris Marines Flyer). I love all of the new Primaris Marine models, but the rules so far aren't really doing it for me. Hopefully that'll also change when the Codex drops later this month.

That's all for this update. I do have a lot going on, just haven't had the time to post. I am participating in an escalation league at the local Warhammer Store, I started a new Blood Angels Army for 8th Edition, and I am planning on doing a 100 Days of Making Minis challenge like my buddy Tom Mason did. Check it out here.

Next time I'll be posting from my brand new hobby work room in my new apartment. I'll be starting my 100 Days of Making Minis and doing a tutorial on converting Primaris Marines to Blood Angels. Make sure you stop back as you won't want to miss it.