One of the most talked about rumors leading up to the Blood Angels release was The Stormraven Gunship, the elusive flying transport that was to be released with the latest iteration of the Blood Angels Codex. There was some impassioned discussions on the various forums whether or not this vehicle was wishlisting or if it was real and would come to pass.


Preorders went up, black boxes were shipped, and the Blood Angels Codex has been devoured by people all around the 'net on various sites such as Warseer, The Bolter and Chainsword, and Dakka Dakka. The good news was the Stormraven was in. The bad news is there wasn't a model in sight. Not even a sketch or a concept drawing in the new Codex according to numerous reports.


Why Games Workshop would have rules for such a prominent and awesome vehicle and not release a kit for the Stormraven is beyond me. This has pretty much been par for the course with other recent GW releases such as the Space Wolves (Fenrisian Wolves, Thunderwolf Cavalry), Tyranids (Swarm Lord, Tervigon), and now the Blood Angels. There was a post on this very topic over on Fort Buyaki, so I won't revisit that topic here.


What I do want to talk about are the various conversions that have been popping up on the various sites in the past week. While I feel that the lack of a an official model is a real let down, it is nice to see various interpretations of it around the 'net. Some are good and some are bad, but hopefully all of these make you inspired to go out and create your Stormraven Gunship.


If you are building your own Stormraven or have ideas on how to convert one, provide a link or add some comments below and let's get a discussion going. What do you think the gunship of the Sons of Sanguinius looks like or how would you convert one?


Without further adieu, here are the pictures. 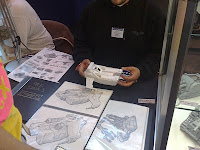 This is the Stormeagle that was shown at one of the Forge World events. I still have my doubts that this is a future Stormraven as some claim. I love the sketches, but hate the mockup. 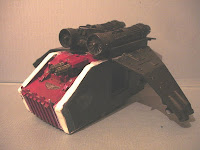 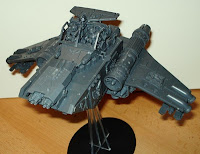 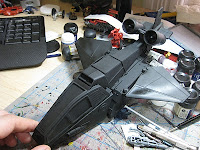 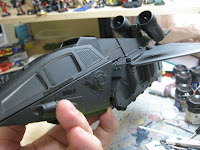 Here is what Jawaballs is working on. It's made from a G. I. Joe Sky Hawk. Man does that toy bring back memories... 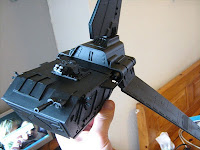 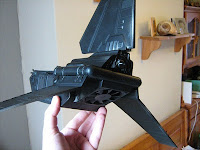 Not intended to be a Stormraven, but this is a great example. If you beef up the wings and add some engines from the Valkyrie, you have a winner. 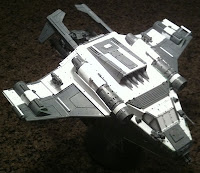 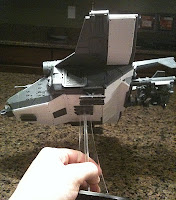 Romeo, the creator of Battle Foam made an amazing Stormraven. The conversion work is top notch. My only gripe is I'm not a huge fan of the shape. 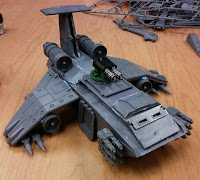 This most closely matches what I envision for the Stormraven. A smaller Thunderhawk. 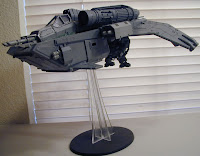 I have more pictures of this one than any other. I like that it's unique and the size seems right to me. Extra bonus? It's mostly made from Valkyrie parts. Cost effective and cool equals win in my book! Painted pics follow. 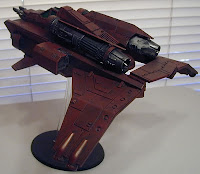 I'm still not sure what I want to do with the Stormraven Gunship for my own army. I don't know if I should convert my own or wait it out. I figure I'll have a better idea once I get my hands on the new Blood Angels Codex.

Next time, I'll go further into the conversion project for my cadre of Razorbacks and making twin-linked assault cannons.

Continue to Part 2 of Stormraven Conversions.
Posted by The Harrower at 10:31 PM