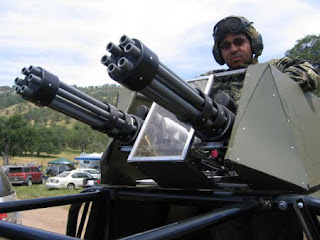 My search for the cheapest assault cannon bitz has come to an end. Several people had mentioned eBay as the best place to go. After watching several of the turrets from the Land Raider Crusader/Redeemer go for upwards of $15 a piece, I decided that wasn't the best choice. I want to try and keep my hobby spending at reasonable levels as to not incite the Black Rage in my wife.


After looking around the 'net for several days, I finally came upon the perfect bitz pack offered by Hoard O Bits on eBay. If you do a search for 40K Assault Cannon in his store (click on the link I provided above first), you'll find 40K Bit Dark Angels Master + 6 Assault Cannon. This is the one you want.


Hoard O Bits has them available as Buy It Now or in regular auctions. I watched two of the auctions end and tried to get a last minute bid in, but they still ended at higher than the Buy It Now price of $19.50. As for shipping, I won the auction Wednesday night and already had the package on Saturday morning which is much faster than I expected.


So what do you get for $19.50? Well, 6 assault cannons for starters plus 3 twin-linked heavy bolters, 6 search lights, 3 power sword arms, 3 Land Speeder antennae, and a few ammo boxes and mounting bitz for the guns. If you ask me, this is a great deal. I'll definitely find use for the power sword arms and I was thinking of making some sort of beacon/objective marker with the others (I'll save that for a future post on terrain). Here is a pic of what comes with the auction. 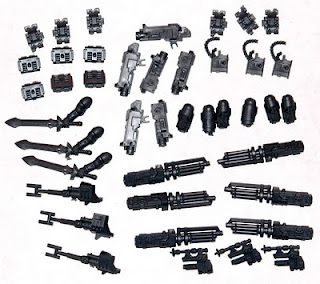 The assault cannon bitz themselves are a bit smaller than the one that comes with the Land Raider Crusader/Redeemer which is fine by me. In my quest to keep down costs and have a lot of options available for my army, I plan on using the turret that comes with the Razorback and cutting off the tips of the heavy bolters. From here, I plan to magnetize it so I can use either the assault cannon or the heavy bolter.

Next time I'll break out the jeweler's saw, super glue, and some magnets and start work on my first tutorial.

Until then Enim Sanguinius,
-The Harrower

Continue to Part 3 of Blood Angels and Assault Cannons
Posted by The Harrower at 10:41 AM