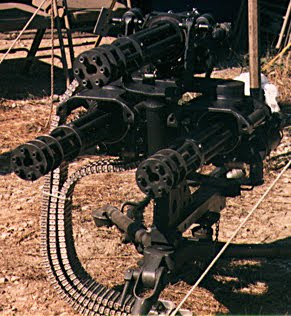 I apologize for the brief hiatus. The digital camera I have been using got a cracked LCD and I couldn't get it switched to macro mode and the pictures I was taken looked awful. Just got a new Canon Powershot which I am loving and I'm back in business. On with the tutorial!

So I have all of my bitz together and I am going to work on creating the twin-linked assault cannon turrets for my Razorbacks.

Initially, I wanted to be able to cut off the tips of the heavy bolters and magnetize them so I could have some options available for my Razorbacks. I've done a bit of messing around and it just doesn't look right.

I can't really foresee many scenarios where I'll use the twin-linked heavy bolter, so I'm just going to create the assault cannons and go with them instead.

Below is the list of materials you'll need to get started on this:

Step 1. This isn't really a necessary step, but more of a plea to all 40K players out there. Drill out your gun barrels! Nothing kills an awesome painted miniature more than a gun with no gun barrel. All you need to do is find the center and start a hole with your x-acto knife. Once you have that in place, drill it out with your pinvise. This is a major pain (especially with an assault cannon!), but if you take the time to do it it makes a HUGE difference. If you do make the hole a bit off center, you can always correct it by slightly widening it with your x-acto knife. Pics of the gun barrels are at the end of this post. 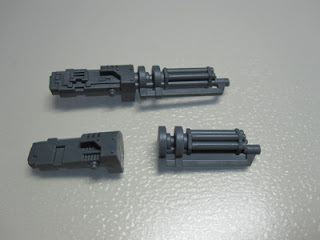 Step 3: Here we need to cut the tip off of the heavy bolter. You can use an x-acto or a jeweler's saw for this step. A jeweler's is hard to use for this step because you have to be extra careful to make your cut straight. With an x-acto you'll need a cutting mat or a piece of wood to cut against. I also cut off the ammo ejector as the assault cannons don't have one, but you can leave it on if you prefer. 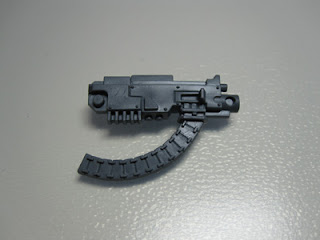 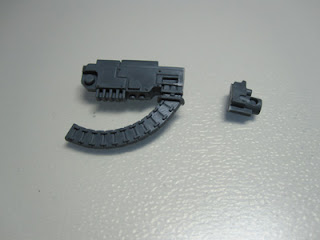 Step 4. Glue the assault cannon bit to the heavy bolter. I'm not a fan of super glue especially for plastic. I use Testor's plastic cement as it create a much stronger bond, but use what works for you. You do want to be careful when you glue these bits together as you want both of your assault cannons to point straight and be the same length. Do a bit of dry fitting before you commit to gluing them together and make any adjustments with an x-acto or needle file. 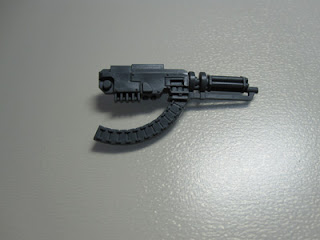 Step 5. Assemble the entire turret and you are done!

Below are some comparisons pictures between the twin-linked assault cannon that comes with a Land Raider Crusader/Redeemer and this kit bash. While my version is a bit smaller, I do prefer it for the Razorback. I like the Land Raider assault cannon, but it looks a bit too bulky for my tastes. 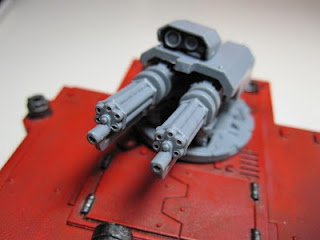 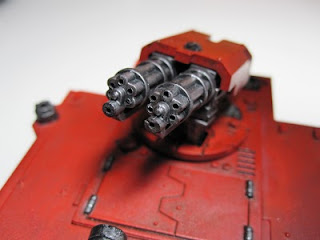 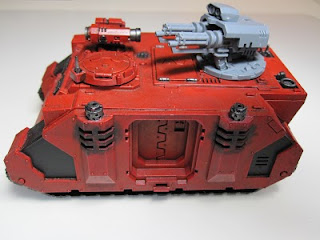 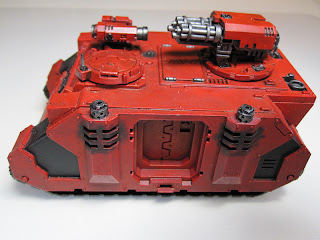 I've been like a kid in a candy store with the new Blood Angels Codex and the awesome new models. I've been working on putting together a whole new army and I'll share some pics, my thoughts on the dex in general, and other goodness in the coming weeks.

Until then Enim Sanguinius,
-The Harrower
Posted by The Harrower at 11:18 PM