Sorry for the stagnancy with my blog. My Game Art degree at Full Sail University has been keeping me extremely busy and I haven't been able to keep up with the hobby at all.

I did get a chance to attend the last Baltimore Games Day and I took a ton of pictures. My classes start to wind down a bit around the holidays, so I'll try and post more then.

I wanted to share this picture of the Blood Angels Stormraven that was leaked on Games Workshop's website. 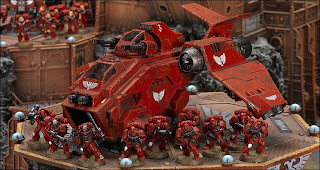 The picture was accompanied with the following article:

Over the next few pages, we will be taking a look at how to paint the Blood Angels Stormraven Gunship, including how to weather the vehicle and paint the interior detail. A great addition and centrepiece model for any Blood Angels army, this will be an invaluable guide to help you get the most from this fantastic kit.

Death from Above
The Stormraven Gunship is an incredibly versatile craft, able to fulfill the roll of orbital dropship, armoured transport and strike aircraft in a way that few, or indeed any, ships could hope to match. The Stormraven ensures that the Blood Angels remain undisputed masters of the skies, as dominant in the air as their troops are on the ground. Smaller and nimbler than the more cumbersome Thunderhawk Gunships, the Stormraven's compact hull and vectored thrusters enable it to operate at maximum efficiency in all but the densest terrain. A Stormraven can often be seen hurtling straight into the heart of the enemy forces, unleashing its considerable arsenal in a terrifying display of firepower, before disgorging a squad, Dreadnought, or even both, into the thick of the fighting.

On the tabletop
With its potent firepower, speed and transport capacity, the uses of a Stormraven on the battlefield are myriad, but its role of choice is as an unparalleled assault vehicle. With a huge variety of weapon options, and no less than four tank-busting Bloodstrike Missiles, both enemy infantry and vehicles alike fear drawing the attention of its guns. A transport capacity of 12 combined with the ability to safely carry a Dreadnought to battle as well certainly proves the Stormraven to be a transport vehicle of the very finest quality. This unique combination of speed, firepower and transport capacity means that a Stormraven can support any tactical preference, so there is always a place for it in any Blood Angels army.

Nick: A Stormraven will be the focal point of your army, so it's well worth giving it a lot of attention when painting it. These techniques can effectively be applied to any other vehicles in your Blood Angels army too, so keep this in mind and you will have a great looking fleet of vehicles in no time. I painted this Stormraven to match the battleforce that I painted for the Blood Angels army workshop in February 2011's White Dwarf; it's part of the 3rd Company, in keeping with the rest of the models. As a personal touch, I've weathered the model to appear heavily battle worn, but if you wish to keep your vehicle in pristine condition, skip page 6 and you'll have an immaculate vehicle, fresh as if at the beginning of a campaign.

I have to say, I'm not really blown away by it. It looks a bit too... chunky for my tastes. I'll reserve final judgement until I see it on the table top and I'll definitely be picking up at least one. I just thought it would be a sleeker design.

The other item of note is the Dreadnaught in the background. This looks like a new plastic kit. Both of these kits would make for a sweet Blood Angels second wave. Let's hope they are released soon.

Till next time, Enim Sanguinius!
–The Harrower