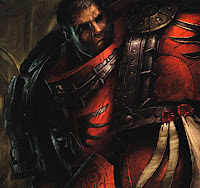 My new weekly series needed a name. I wanted something I could use to tag all of these articles, was easy for people to remember, and was creative and indicative of what the articles are about. Liber Sanguinis fits those criteria even if it isn't very creative. Oh well. It'll serve the purpose I need and I don't think it's as bad as the myriad of blood-themed wargear in the new Codex. Bonus: I did find a cool website with latin translations while I was contemplating the name.

The first thing I want to do is decide on a strong core for my army. I've been gaming regularly with the DED 'ARD Gaming Club and playing 40K almost once every month, so I have a pretty good idea of what works well for me and the type of force I want to go with.

Before I go into what I'll be using, I did want to mention a bit on tactics and strategy. I will touch briefly on those topics in this series of articles, but before I do, this advice comes with the caveat that I am not a master tactician. Even though I have been wargaming for over 10 years, I'm not an über competitive gamer nor am I yet into the tournament scene. I dabble with mathhammer (running statistics on dice rolls to determine the best outcome), but I'm not obsessed with it.

I consider myself a well rounded gamer that likes all aspects of the hobby and my manta isn't: "To crush your enemies, see them driven before you, and to hear the lamentation of their women." If you guys are looking for that sort of thing (and there is nothing wrong with that type of play as long as it doesn't ruin the fun of the game for your opponent), check out Stelek's Blog, Yes The Truth Hurts. I'll gladly discuss/debate my tactical decisions as I go through this series of articles, but I really don't want that to be the focus of these articles as that type of content is better served by other blog authors out there (like Stelek and Jawaballs) who have experience with the tournament scene.

That being said, there are lots of different types of Army Lists out there that you can go with. Below are just a few of the more popular ones:
During this stage, I'm not only thinking about what I want my actual starting force to be as far as an army list goes, I'm also considering a lot of other things. What style of army suits best the way I play? How do I want my army to look? What units do I want to include? What will give me a good competitive list? Next time I'll answer these questions and pick my starting force.

Until then Enim Sanguinius!
–The Harrower
Posted by The Harrower at 11:10 AM