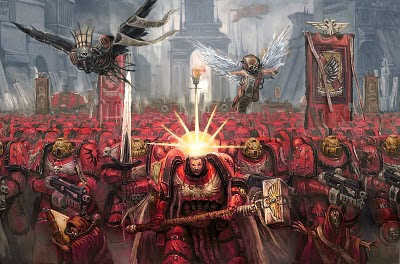 Last time, we examined different types of army lists and I was explaining the things I look at when selecting a force. I have maybe a score of games under my belt since the new Blood Angels Codex was released, so I already know what I want to go with. I do want to describe this process for the newer generals out there as starting out with 40K can be pretty overwhelming as there are a lot of aspects to creating ones army.

The first thing you want to examine is how you like to play the game and pick an army that suits your play style. If you make better tactical decisions with an army that is defensive and brings a lot of fire power, you aren't going to play as well with a force that is geared for close combat.

As for my particular play style, I've always played games more aggressively. That's not to say that I'm all offense all the time, but I definitely believe in the old roman saying: fortune favors the bold. I've always preferred elite armies (I'll take 1 skilled warrior over 5 scrubs anytime) and I do like troops with mobility that can react to the ebb and flow of battle and quickly get to where they are needed. Lastly, I prefer close combat. Nothing is more satisfying to me then launching a key assault that breaks the back of my opponent's army and turns the tide of battle in my favor. All that being said, I think you can see why I was really happy with the new Blood Angels Codex. Not only were they the army I started with back at the onset of 3rd Edition, but their strengths suit my play style perfectly. 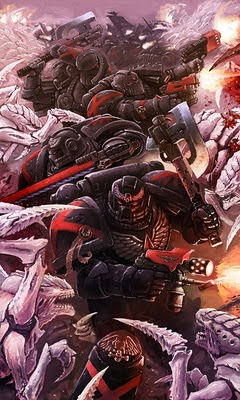 In our DED 'ARD Gaming Club I have to play against Space Marines, Space Wolves, Eldar, Sisters of Battle, Orks, Tyranids, Chaos, and Imperial Guard. It's a pretty good mix and with that in mind I do want a list that can work effectively against all my opponents. I need to be able to deal effectively with horde armies and have a lot of anti mech when facing Imperial Guard. Lastly, I need a decent amount of firepower for dealing with Farseer Frank's pesky Eldar. We've been playing 1,500 point games recently, so that's the list I'll start with. After reviewing the models I have, this is what I came up with.

I'm not entirely happy with this army, but I think it'll get the job done. The Landspeeders serve double duty as both anti mech and anti horde. The Razorbacks add fire support and the Assault Squads can definitely hold their own in close combat with the addition of the Sanguinary Priests. The Baal Predator is there to draw enemy fire while the Rhino will go objective hunting. The Death Company and the Dreadnaught lead the charge.

If I had the models, I would probably leave out the Baal Predator and take another Land Speeder Tornado and a Drop Pod for the Dreadnaught. I'm also debating dropping the Tactical Squad and taking another Assault Squad in a Drop Pod. I do like this list as it does give me a lot of options. I'll need to play this out for a few games and see how it goes. So what do you guys think? Does this look like a decent list or does it need some work?

Next time, I'll start talking about putting my models together and get into the approach of building and assembling my army. The DED 'ARD Gaming Club is getting together this Sunday the 19th, so I'll get to put my army to the test. I'll try and take some pictures and possibly put together a battle report for next week.