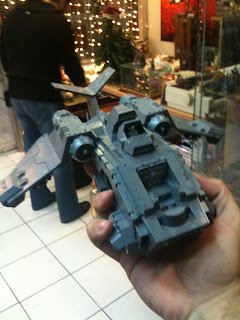 This just missed Christmas by a few days, but tis the season to be jolly if you are a Blood Angels player. I found these new leaked pics of the Stormraven and the Furioso Dreadnaught sprue from over on Freak Factory.

I have to say, I'm really starting to like the look of the Stormraven. It's ugly in a bad ass bull dog kinda way. I'm looking forward to when the final kit is released so I can pick up a couple of them.

I can't wait to paint one up in black with a red "X" and unleash the Death Company and a Death Company Dreadnaught against my foes. It's really the only way I would ever field Lemartes as I think Death Company with Jump Packs are just too expensive, but that's a topic for another conversation.

Even though the Stormraven is starting to look really cool, I think the real gem is the new Furioso Dreadnaught sprue (picture below). I picked up the Chaplain Dreadnaught from Forgeworld and while I really like it, I like the options on this sprue so much better. 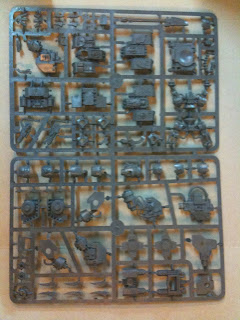 Looks like the new sprue comes with blood talons, 3 sarcophagi (including a Death Company one), a force halberd, and lots of other tidbits. I really like the sarcophagus with the built in psychic hood and all of the sculpted Blood Angels iconography. I have't started on my Chaplain Dreadnaught yet and these new pics are making me consider putting it up on eBay. I wish the pics were a little clearer as it's hard to tell if this comes with the frag cannon and the magna-grapple.

Hopefully these kits go up on pre-order soon so we can get some better pics.