Last Saturday was the 40K Tournament at Adventure Games in Dixon City, PA. Turns out that Jawaballs and Fritz didn't show, but there was a good turn out nonetheless. I didn't want to do my Blood Angels a disservice and play my first tournament with only a primed army, so I decided not to play.

I wanted to scream at times watching Solidsnizzle's games because he missed a lot of key assaults, but for someone that has been playing 40K for less than a year and was using an army he never played before (he's only played Imperial Guard), he did really well and I was very impressed.

The Tournament victory didn't stay in the DED 'ARD family unfortunately, but was won by Jim Benson who had a really well painted Sisters of Battle Army. He seemed like a really nice guy and played some solid games from what I saw, so kudos to him on winning an extremely close tournament. Next time, maybe DED 'ARD we'll be able to bring the trophy home. All in all, it was a great first tournament at Adventure Games with a good turn out and hopefully they'll be a lot more tournaments in the future.

The next tournament at Adventure Games will be on July 24th and will be a Two Headed Giant Tournament featuring 2 vs. 2 games at 2,000 points. I'm really mad I didn't play in this tournament, so there is no way I'm missing the next one. Expect to see a lot of painting posts in the coming weeks as my Blood Angels get ready for the coming battle.

Here's some more pictures I took throughout the day. Once I have the proper DED'ARD website completed at http://www.dedard.com, we'll be able to have real photo galleries and I'll be able to post a lot more pics. 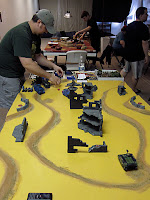 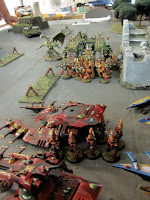 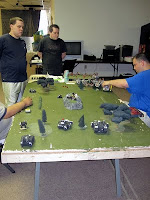 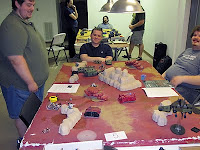 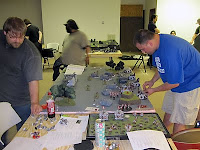 Next time I'll talk a bit about my new commission service and I'll be doing some spring cleaning and posting a bunch of eBay auctions. Watch this space for some sweet deals.