I have a lot of models laying around the house and my wife has been bugging me to get rid of some stuff so I started a bunch of auctions up on eBay. A lot of these are models I meant to put together, but I never did. You can see all of my current auctions here. If you're leery about purchasing on eBay at all, rest assured I have a 100% feedback rating and I'll do combined shipping if you win multiple auctions. Here are some highlighted items: 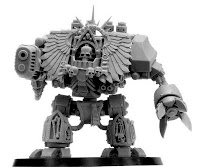 I have a lot of other auctions up on eBay like regiment bases, movement trays, combi-weapons, plastic jungle trees, and some other metal miniatures. If you have any questions, drop a comment below or send an email to theharrower[at]dedard[dot]com.