Everyone from DED 'ARD got together at my house 2 Sundays ago for some 40K madness. I ended up playing 2 games. First one was against club member Necromonger and his homebrew Vanilla Space Marines chapter. He's new to the Space Marines and was trying out a list with a Land Raider, Thunder Hammer Terminators, 2 Predators, a Vindicator, Land Speeder Storm, and Vulkan. We ended up playing Capture and Control.

In the first turn, I immobilized his Land Raider and took out the Demolisher Cannon on his Vindicator. From there, it was pretty easy to control the board and stay away from the Thunder Hammer Terminators. I pretty much dictated the flow of the battle and my opponent couldn't do enough to get into position and capture the objectives. Victory for the Blood Angels!

Second game ended up being a 3 vs. 3. with Chaos, Blood Angels, and Eldar vs. Grey Knights, Vanilla Marines, and Imperial Guard. We played 3,000 points per side with 1,000 points each and our own force orgs. I ended up trying the list I intended to take to the Two Headed Giant Tournament at Adventure Games this weekend and I absolutely hated it. We played Kill Points with Dawn of War deployment and won the day, but I sunk way too many points in the Stormraven's unit with Death Company a Reclusiarch and a Death Company Dreadnought. We won a narrow victory with my army giving up most of the kill points. 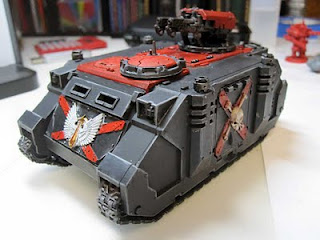 I decided to scrap that list and start over from square one. I have a much more balanced list which I'm confident will play much better. I'll share my list after the tournament. I haven't had time to post since I've been feverishly painting this past week, but I have taken a lot of in progress pics so expect some painting tutorials in the near future. Been messing around a lot trying to get a nice black and this is what I came up with. There is a lot of clean up and little details needed to be done, but I'm pretty happy with the final look.

I learned a valuable lesson with using Badab Black Wash to try and "tint" down my highlight lines. It left a ton of brush strokes all over the tank and I had to redo all of the black. I've done a lot of black previously with my old Death Company and the Rhino I entered in Golden Demon many years ago and I never ran into this problem. Maybe that was because I used Games Workshop's old Inks or my pot of wash is just bad. Anyone else run into this issue?

Lastly, Ron Saikowski had an interesting post on From The Warp on the top 3 things not to say in a post and I'm sorry to say that I'm guilty of all of them. I'm going to do what I can to make sure what I post shows a model or something I am working on and isn't just filler because I've been a lazy git and I feel bad because I haven't done more with the hobby and updated my blog.

Tomorrow, I should finish up my test marine and get going on my infantry models. I'll post it here in the next few days.