Long time no post. I won't go into a long winded apology about why I haven't updated in almost two months as Ron Saikowski had a good post on what not to post about and I don't want to break the Lord of the Warp's 3rd rule.

Anyway, the doubles tournament is long since over. For my first tournament experience, it went well. I paired with a friend of mine from the DED 'ARD Club that plays Imperial Guard. He brought all the big guns and I brought forth the might of Sanguinius with my Blood Angels and a deadly assault force.

We ended up winning our first two games and playing in the third and final game for the championship which we lost to a really tough Grey Knights and Orks list. They used a Big Mek with a Kustom Force Field and a Grey Knights Librarian with The Shrouding to blanket most of their army with a 3+ cover save. It was like Episode I all over again. Unfortunately (fortunately?) our opponents were the Gungans and while I kept thinking it would get better, in the end it just sucked.

Late in the game, I made a last ditch charge with my entire army and beheld my Death Company felling an impressive 23 Ork Boyz on the charge and running down the remaining few. We had them on the ropes and nervous, but in the end, the nut was too hard to crack and some Grey Knight reinforcements arrived via deep strike and sealed their victory. One highpoint was my Reclusiarch standing toe to toe with an Ork Dreadnaught for 2 rounds and refusing to go down. I actually made four 4+ invulnerable saves in one round to stay alive at the end of the game and made the Primarch proud. I also got a good chuckle out of their Vindicare Assassin who couldn't hit the side of the barn even with an 8 Ballistic Skill. 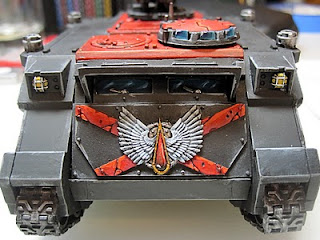 As for my models, I never got them finished. I got the required 3 colors done for the bonus points, but I don't think they even scored painting (not that it would have mattered anyway). I'm still working on my Assault Squads, but honestly I haven't painted much since. I did pick up a Paasche Talon Dual Action Airbrush that I have been messing with, but I really haven't had a lot of time to do hobby stuff. I worked on some scenery here and there, but that's about it. I did finish up a lot of the details on my Death Company Rhino/Razorback and I'm pretty happy with how that turned out.

There's going to be a bit of a shift in what I'm covering in the blog in the coming weeks as I start doing some game design work again and focusing a little more on... Mordheim!

I'll talk a bit more about my history with Mordheim and describe the changes to the blog in my next post.