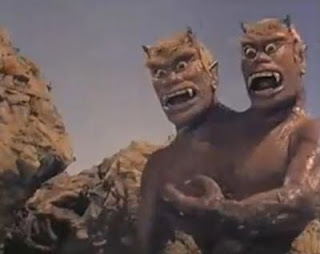 So I'll be playing in my first tournament at Adventure Games in Dickson City, PA on July 24th. This tournament is a Warhammer 40K Two-Headed Giant Tournament. Here's the rundown on the rules.

2. Each individual member of the team is permitted to spend 1,000 Points on his or her half of the team.

3. During gameplay each player will control (move, fire, make saves) for their own individual half of the giant. 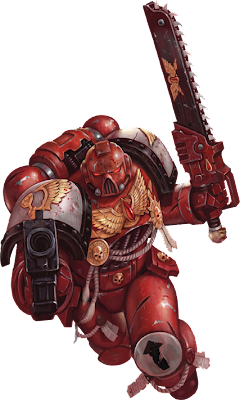 4. Excess Points are lost and can not be for any reason gifted or shifted to your opponents total allowed points.

5. Each player does NOT need to be a fully functional independent force. This means that between BOTH HALVES of the FORCE you must adhere to the legal Warhammer 40,000 Army Composition (BOTH HALVES!)

Example: Player A can focus on spending his points on Strictly Elites/Heavy Support and Player B can purchase the required troops/headquarters to make the entire force as a whole LEGAL. Just remember, each player is only permitted 1,000 Points individually. Your probably thinking wow, I can whip up some really obnoxious setups. Correct: That's the idea.

6. THERE IS NO RESTRICTIONS ON ALLIANCES (Tyranids can Ally with Imperial Guard, Space Marines w/ Chaos etc)

7. Allies can in every circumstance use each other transports.

Example: Tyranids/Space Marines make up the Giant. You CAN put Tyranid Warriors into a Land Raider. Just remember, individual codex restrict units beginning the game inside of a transport without it being dedicated. The dedicated transport rule is a CORE RULE and must be adhered too.

8. Prior to the match beginning (AFTER SETUP) the two teams will be permitted (5 Minutes) that will not take away from game play time to quickly discuss their strategy. After the 5 minutes concludes any/all discussion must be done (AT THE TABLE). This is to ensure that the games are not being bogged down my nonsense/stepping away from the table.

9. To reiterate RULE #3. Each player will ALWAYS control the fate of their own half of the force. No making saves for one another, setting up, shooting and especially moving your partners models. If you are caught doing this for any reason what so ever you will be immediately penalized battle points and if it continues disqualified from the tournament. I cannot stress how serious I am about this rule. 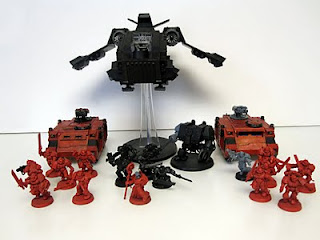 I'll be teaming up with fellow DED 'ARD member SolidSnizzle and his Imperial Guard. Here's a pic of my half of the Two-Headed Giant and the list of what I need to get done in the next 3 weeks.

Seems pretty daunting, but I do have most of the models primed and ready to go. I've really been slacking off on the hobby side of things, and I hope this tournament kicks my butt in gear and gets me going. I'll update periodically over the next few weeks on my progress.