I apologize for the brief hiatus. There is a lot that I have been working on in regards to the hobby, but I wanted to focus on getting things done and take a break from the blog for a bit. Not to fear, I have some cool content planned for 40K as well as Mordheim in the coming weeks.

I've been doing a lot of terrain in preparation for a campaign I'm starting next month, and I wanted to talk a bit about making craters. Craters are an absolute necessity for 40K. Not only do they make the battlefield look war torn and cool, but you need craters to represent destroyed vehicles. I've played in places where they've used old CDs with texture on top or cut circles of material to represent craters, and while it works for gameplay purposes it just doesn't look right to me.

I was looking at other alternatives and Greenman Designs, Inc. makes cool laser cut acrylic templates the exact size of a destroyed vehicle. For gameplay purposes they are perfect as you can set up your models without any issues, but buying a lot of these can get pricey and there is the whole having a realistic looking battlefield that I am such a stickler for.

I decided the best thing to do was just to make my own craters. Originally, I made a few craters out of blue foam. They looked decent, but the problem was getting models to stand on them. Plus, if the crater is too small you end up packing your miniatures in as close as possible. Which isn't bad until someone drops a blast or flame template on your squad. In hindsight, realistic looking craters don't make good terrain. I messed around quite a bit with blue foam, but I couldn't get something that looked suitable and played well. 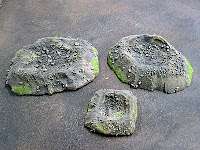 Those that play in my gaming group know that I have a love hate relationship with all of the new fangled plastic kits that Games Workshop, Pegasus Hobbies, and other companies have been producing recently. Good homemade terrain is just as important to me as converting and painting your own models. With the Realm of Battle Gameboard and a newer kits like Skullvane Manse and the Fortress of Redemption scratch building terrain seems to be a part of the hobby that is starting to die out. Take a look through any recent White Dwarf or take a trip to an official Games Workshop store and you mostly just see Realm of Battle Gameboards with plastic sprue terrain. So it was with some regret that I turned to a plastic terrain kit to solve my problem.

My thought was to use Games Workshop's Moonscape. I know a lot of people hate it because models won't stand on them because of the smooth sides, but I figured if I based it on MDF and added additional texture it should work fine. Initially, I thought this approach worked the best. The craters were sturdy and looked good and models could easily stand on them without tipping over. 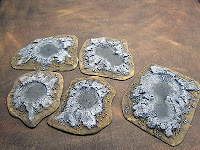 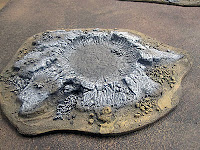 Then we ran into an issue I really didn't expect. The craters were way too big. If a unit was attacking a transport in close combat and it blew up, the crater was so big that the unit attacking in close combat ended up in difficult terrain. The other problem was if there were two transports together and they both exploded, we didn't have enough room to place another crater. 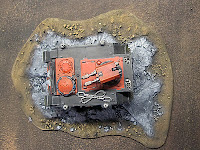 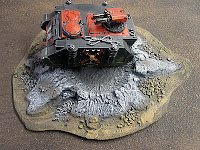 I thought I'd try the crater set by Pegasus Hobbies. At $12.99 from TheWarStore I figured it would be worth the investment even if it turned out to be a bust. The craters came in and they were similar to the Moonscape set: nice, but just a bit too big. There was one triple crater that would have worked perfectly if they made the individual craters that size. On a whim, I took a pair of scissors and cut it up into individual craters. The size was almost perfect. 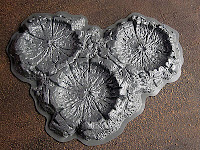 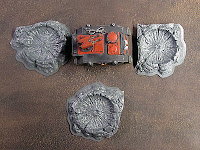 I'll just need to base these on MDF, fill in the cut out side, and paint them up. Next time I'll do a quick tutorial and finish these off and we'll see how they work.