Necron impressions after a couple games 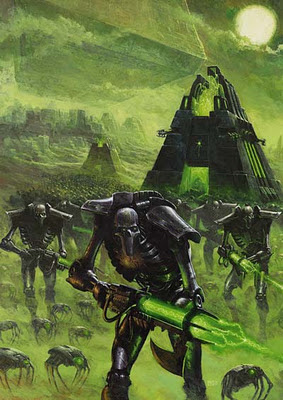 We went on a road trip this past weekend to New Jersey to pick up the Necrons. I wanted to start small since I haven't finished my Blood Angels yet, and a friend of mine has been waiting for this release for ages so he has models he graciously let's me borrow when playing. I picked up the Codex, a Cryptek, and the Ghost/Doomsday Ark (these names still confuse the heck out of me!).

I put together a quick list at 1,000 points and I got to play a couple games with them over the weekend. Seeing as they are the new hotness and my second army, I thought I'd give a quick run down of my thoughts after my games against Imperial Guard and Grey Knights. Here was my list:

I posted 2 losses. The first game I played against Imperial Guard. The mission was Capture and Control with Pitched Battle deployment. I decisively lost this game because my Immortals with Tesla Carbines couldn't scratch a Valkyrie that was contesting my objective and I couldn't get close enough to contest the other objective. It didn't help that my Necron Overlord hung out in the Ghost Ark all game with a unit of Necron Warriors far from the action. I also forgot that monstrous creatures have Move Through Cover and my Canoptek Spyder moved like 8" in 4 turns and left the Canoptek Scarabs on their own where they got crushed in assault. It's a humbling thing to see an army decimated in assault by Imperial Guard, but that's what happened.

The second game, I played against Grey Knights. The mission was Annihilation with Pitched Battle deployment. This game was a lot closer and I only ended up losing by 1 kill point. My folly in this game was forgetting the mission from the very beginning. I needed to just hunker down and open fire. I spent a couple turns moving my Ghost Ark 12" which meant it and the troops inside couldn't fire. That was 28 shots wasted. I wanted to be in rapid fire range, but that didn't get me anywhere. Next time, stay put! Plus, I got a bit too aggressive when deep striking my Necron Destroyers and they were annihilated by a Purgation Squad with 5 Psycannons and Astral Aim. I didn't do bad, I just couldn't cause enough damage to win.

Not So Fast
Going from Blood Angels to Necrons is going to be a steeper learning curve than I thought. I'm used to zooming around the battlefield laying down shots from my Razorbacks, but you don't have that luxury with Necrons. A lot of people are calling the Necrons a mobile army. I disagree. They are quite the opposite as you need to pick your spot and fire away.

"Did you say nine pens?"
Canoptek Scarabs are INCREDIBLY deadly. Taking a Leman Russ' armor down by 8 points on all facings in 1 turn is crazy. Same goes for a Psyfleman Dreadnought with 5/5/3 armor. There really is nothing cooler than shooting with gauss flayers and all your hits auto penetrate on the damage chart. 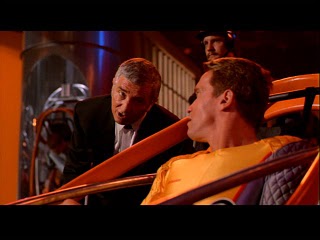 "Killian, I'll be back!"
The Necrons are crazy resilient. Reanimation Protocols works really well as does using the Ghost Ark to add D3 fallen Necron Warriors back to a squad. The ability for Canoptek Spyders to generate additional Canoptek Scarabs is awesome and my opponents were not pleased by how resilient my force was.

Gauss is Boss
Don't underestimate gauss weapons glancing on a 6. I did some serious damage with this. Maybe it was luck, but I was a mech armies nightmare and I wasn't even optimized for that. Of course, against the Grey Knights that didn't mean much with Fortitude, but there is a lot more potential there than most people probably realize.

"Don't get cocky kid!"
Starting fast doesn't guarantee a win. In both games, I started out with a huge lead putting some serious hurt on opposing vehicles by immobilizing them early. By the end of turn 2, it looked like I had both games in the bag, but my lead quickly flitted away. If you aren't careful, a couple assaults can really turn the game around. With this army more than any other I've seen, the tables turn fast.

Changes with 6th Edition
A lot of people said that some stuff with the Necrons won't make sense until 6th Edition. First off, rapid fire sucks. Necrons are a shooting army with primarily rapid fire weapons which means you sit around a lot. Rumor has it that 6th Edition will change rapid fire to the following:

Rapid fire weapons may be fired twice at max range if the shooting unit didn't move that turn, or once at max range/twice at 12" if they moved.

If that's the case it will be a HUGE boon to Necron armies as it will pretty much double your shots. It also makes a lot more sense why Death Marks have rapid fire sniper rifles.

Overall, I think Matt Ward did a great job with the Necrons. I don't see them as overpowered. Sure, there is some nasty stuff in there (Canoptek Scarabs, Death Ray!), but so far so good. It's a cool book with a lot of really interesting choices that should shake up the current 40K meta with it's focus on anti-mech.