Holy geez! I can't believe I haven't posted in 6 months. I won't bore you with all the details, but a lot has happened in my personal life. Among other things I've been busy with school, won my first 40K Tournament, had 2 surgeries, and most importantly of all I added a new addition to my family with Space Marine Initiate Darryn! Here's a pic of the little guy. 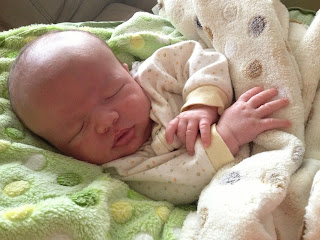 I have a lot more coming up soon (including a move across country to Austin, TX), but I wanted to start working on the blog again because it helps me stay motivated with the 40K hobby. As an aside, if any readers are from the Austin area drop me a line in the comments below. I'll need to find a new 40K crew once I get out there.

Anyway, I was looking through my old posts to see where I was at and I realized I never posted an update on my desert terrain. A lot of the desert terrain I searched for that was specific to 40K was pretty plain in my opinion and all looked the same. Everyone does the same type of rock columns and just rocky looking hills and I wanted to break out from that.


I'm not done by any means, but I wanted to share some pictures. I'll post an instructional tutorial on how I did Tatooine-like the buildings. I haven't seen anyone make buildings like this before and it has the added bonus of being super quick and easy. Without further adieu, here's the pics. 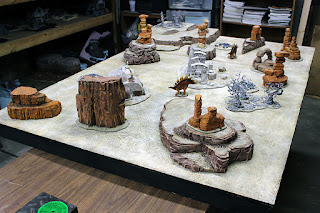 This is almost all of my desert terrain. There's a giant hill I made, but I'm too happy with it because it's way too big. I still need to create a tar pit (I tossed my old one because I wasn't happy with it), an oasis, and some bases with cacti. I also have quite a few pieces that are almost complete except for some more painting including a crashed Aquilla Lander and Blastscape that should be done soon. No desert is complete without dinosaurs, so I have a couple that I use for special missions. 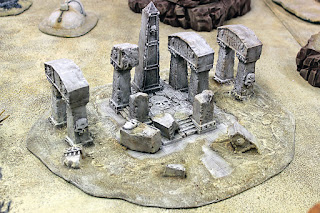 This is made from an Arcane Ruins set and a Modular Movement Tray set. I made cheap molds of the lintels (horizontal stones) out of Lightweight Hydrocal so I had a few extras and I could break them. I also casted a bunch of the skulls that came with this set using Instant Mold and Smooth Cast 300. You can see a tutorial on that here. 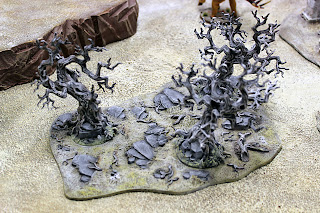 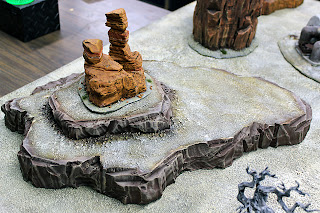 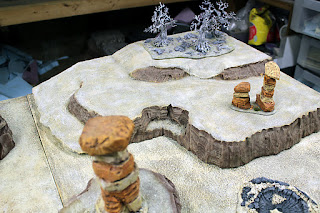 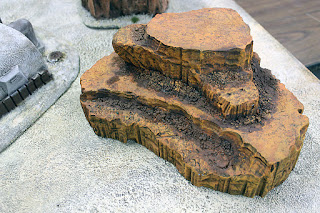 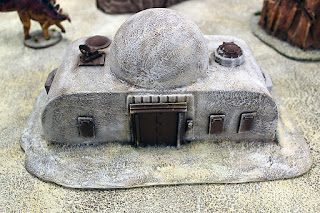 This building still needs some paint, but I'm pretty happy with how this turned out. 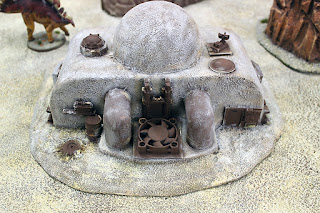 It's made from a blister pack from Skylanders and an odd assortment of bits. I'll have a post on how you can make your own shortly. 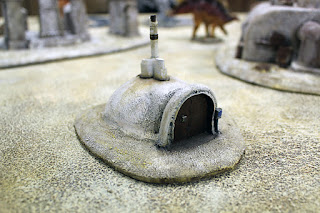 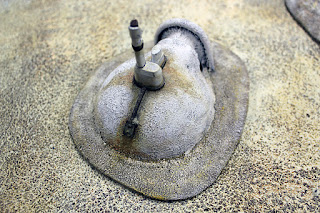 This building was also made from a blister pack. I call it Obi-Wan's house. 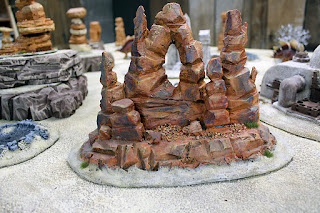 My daughter Kieryn helped me carve this piece. It's pretty much a direct copy of a piece of aquarium terrain I found on Google images. All of these pieces are carved from blue foam and made with a hotwire cutter, and a breakaway razor knife. 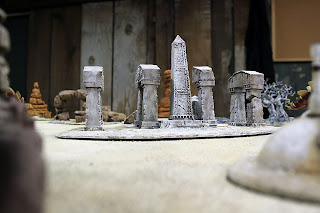 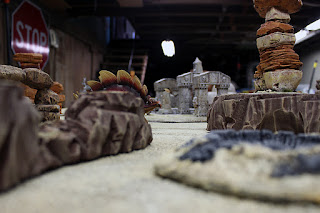 Here's a couple model's eye view pictures. I just bought a Canon EOS Rebel T3i camera and I can't believe how much better these pictures look. I'm pretty happy with the table and it has a lot of flexibility. I just need to add some color to break it up a bit because as is, it looks a little too stark. The oasis, Blastscape, and the Aquilla Lander should add some much needed color.

Not sure what's up for next time, but I promise I'll be posting more soon.