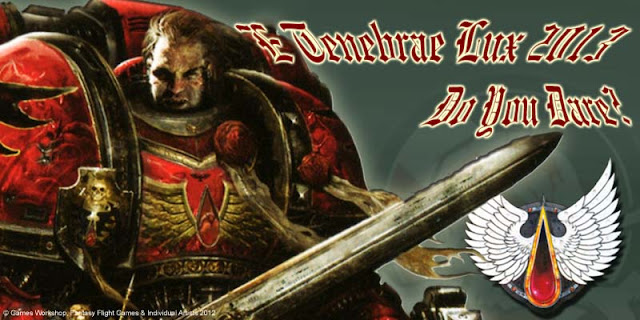 It's that time of the year again when Bolter & Chainsword hosts it's annual painting competition between the various Space Marine Chapter subforums to see which forum can paint the most models by points. The contest is closed to new entrants, but I did sneak in to make this my second time participating in what I think is great way to get people motivated to paint their models.


I'm playing in a Kill Team Tournament this weekend at Adventure Games in Dixon City, PA. I haven't played much Kill Team, but the rules are really cool and it plays like a Mordheim or Necromunda lite where each model acts on his own. If you're interested in checking out the rules, you can download them from Games Workshop's website here.

For my Kill Team list I'm bringing Sternguard. This is one unit I never really fielded before (yeah, I know), but I always wanted to get them into action and the tournament and E Tenebrae Lux 2013 made this the perfect opportunity to get some models painted up. I have tons of bitz laying around for various marines and I didn't want to drop the cash on the Finecast Boxed Set so I just converted my own. Here's where they are at now.

I wouldn't say these are heavily converted, but they are extensively kit bashed. There are parts in here from a bunch of different sets including Death Company, Sanguinary Guard, Tactical Marines, Assault Marines, Terminator Squad, Space Marine Commander, Devastator Squad, etc. Nothing beats a good bitz box when working on a project like this.

I converted the bolters and added the boxed shape clip that the Sternguard use and added a scope. I also made my own combo-plasma on one of the dudes in the back. The most extensively converted miniature I have is probably the Sergeant in the middle. The right arm holding the gun in the air is 7 bitz alone! I'm also pretty fond of the guy on the right and his bolt pistol with scope and Sternguard ammo clip. One thing I don't have on these guys is the strap on the bolters. Should I try and add that or leave it as is?

Next time, I'll post some progress shots and maybe a bit of a tutorial on how I created these guys.