The Cardinal Rule of Painting 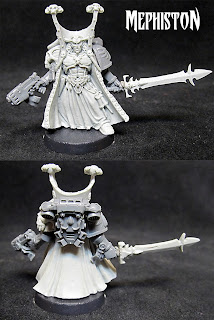 I had a rare opportunity last week and was fortunate to have the week off of school. One would think I would be working on my E Tenebrae Lux 2013 vow, but I was drawn in another direction. I did a conversion of Mephiston back in October that I posted over on Bolter and Chainsword in my WIP thread. I thought the conversion was different enough from what everyone was doing with the Astaroth body and I was really happy with it.

Next, I had to paint him. Awesome, right? Wrong! I rushed through it to get him ready for a tournament and while I thought he was good at the time I never really finished him. A few days later (which is the litmus test for any artwork I do) I took him out and absolutely hated the paint job. Back in my Battle Foam bag he went where he sat untouched and unloved since last year.

Fast forward to the Kill Team Tournament I was in last month where I was being berated by one of my friends for never having any of my miniatures done. I paint fairly well, but my big problem is I always jump from project to project and I rarely finish painting anything. Not sure why, it's just what I've always done. Of course my plans for getting best painted at the Kill Team Tournament were foiled because I only got one model done (well, it wasn't really done...) so I wanted to finish something and claim with a mighty voice: "This model is done!"


So last week I pull out my Kill Team, a Librarian, a Sanguinary Priest, and Vampire Jesus himself–The Lord of Death Mephiston. I'm thinking I'll work on each model for a bit and switch to another one while the paint dries so I start on Mephiston. While I'm waiting for a wash to dry, I get distracted (anything shiny will do that) and I'm surfing the net looking for examples of Mephiston that other people have painted. I somehow stumbled upon either a blog or a forum and I read the most profound thought EVER regarding miniature painting. This individual said, "Don't forget the cardinal rule of painting. Never judge a model until it's done."

Something went off like a switch and I looked at the display case of all my miniatures and realized that's what I always do. I work on something until I'm not happy with it and I quit and move on to something else. Armed with this new found knowledge I sat down whenever I had a chance over the past few days and put the brush to my Mephiston conversion and here he is.

For as much as I hated it before, it's now my favorite miniature of all time. Whoever dropped that nugget of wisdom out there, I greatly appreciate it and this is how I intend to move forward with painting in the future. Finish a model and muscle through it even if I'm not happy with where it's at and judge the final product.

If you are in a similar situation and painting a model, building terrain, or even working on your latest conversion, don't judge it partway through and leave it by the wayside. You may find you'll surprise yourself or better yet you might have that hidden gem that sparks your love for the hobby even more. Now get out those brushes and start painting!