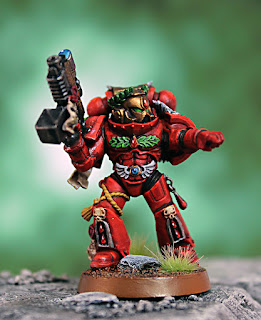 Well, I didn't get all my Sternguard finished, but I did a pretty good job on my Sergeant, Brother Tyrael. Yes, I named all my models and I'm a dork. I also had a chance to touch up my mini display board. I need to push the highlights on this miniature a bit more and add some lighter colors to make it pop, but as is, I'm pretty satisfied. This is my most recent formula for red:


This creates a nice deep red that doesn't look like orange. While I didn't finish my miniatures and win Best Painted, I did tie for second place and I had a lot of fun as Kill Team reminded me a lot of Mordheim and some of the best games I ever played were in the City of the Damned. The list I brought to the tournament was as follows:


This came out to 250 on the dot. You also get to select three Specialists, and you are able to give them each a universal special rule from the 40K Rulebook (the rules for Kill Team are available on GW's site here). 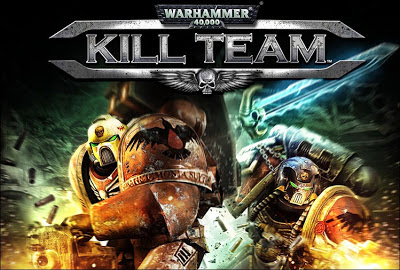 My Specialists were Multi-melta with Relentless, Lascannon with Preferred Enemy (everything!), and the Attack Bike with Feel No Pain. I thought everything worked out really well and I'd probably stick with this list going forward. The Special Ammunition really helps out as you can negate power armour with AP3, easily wound Plague Marines on 2+, or deny Plague Bearers a 2+ cover save. Here's a quick summary of my games.

Game 1, I played against Imperial Guard and won pretty handily. My opponent had some of the worst dice rolling I've ever seen. In two full turns of shooting he only managed 1 wound, and I made my armour save.

Game 2, I played against my friend Roger's Chaos Space Marines. Vengeance Rounds lived up to their namesake and cut down the traitorous scum.

Game 3, I played a mirror match against an Ultramarine Sternguard list. I took out his long range fairly early with a failed 2+ cover save courtesy of Brother Elyon's Lascannon. My opponent ended up in a long range firefight he couldn't win. Only his leader survived, but he did scare me and claimed an objective last turn to only lose by 1.

Game 4, I played against a Dark Eldar list with 2 Venoms. Needless to say I got crushed. It started off good when I earned First Blood and Slay the Warlord when my opponent's leader got hit by my Lascannon and he failed a 2+ cover save. Brother Elyon gunning people down and my opponent's failing 2+ cover was the theme of the day! After that, it was all down hill as the Venoms unleashed their firepower and tabled me.

Game 5, I played against another Chaos Space Marines army. This was against all Plague Marines and a Rhino. I stayed at long range and whittled him down for an easy win.

Game 6, I played against Chaos Demons with a bunch of Plague Bearers and 2 Beasts of Nurgle. I lucked out with this game being 1 VP per model slain and caused enough wounds to be comfortably ahead at the end. This one wasn't easy and it took some doing as I only had 3 models left at the end and I was testing. Luckily, I was able to stave off the Fleshbane Plague Bearer just long enough...

Game 7, I played against another Imperial Guard list. The long day and sitting back and shooting in 6 games prior got the best of me. I charged out of cover headlong and lost 5 marines in a turn. While I took out a sizable chunk of his army, it wasn't enough for him to test and I got tabled again and ended up tying him for 2nd place.

All and all, it was a fun tournament. If you haven't played Kill Team, I'd definitely recommend giving it a try as it requires a new set of skills and unique challenges. For a first time tournament, there were a couple issues and I think the Kill Team ruleset while solid, can use some love to make it a bit more playable. I plan on expanding the ruleset a bit when I have time and posting about it here.