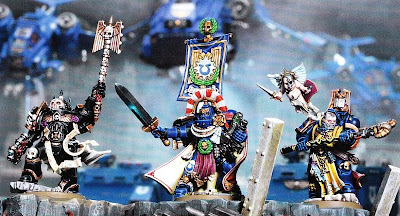 A lot more pics are making the rounds and the current batch of pictures look fantastic! Except for the Centurions as the jury is still out, but the Devastator Centurions do look a LOT better (pics of them below).

Here we have the new plastics for the Chaplain, Captain, and Librarian. These are pretty cool and I like how the Librarian looks like Merlin and has Kano from Mortal Kombat as a cherub. Pretty creepy! Not sure on the Chaplain, but I think this is just a bad angle. I do like how the Captain has the old school crest on his helmet and that he is in the same pose as the Captain from the Black Reach boxed set. Nice homage there and it looks cool.

A lot more pics after the break. 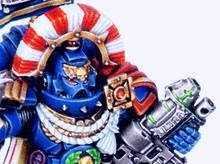 Here's a close up of the Captain and what I believe is the Combi-Graviton. These are supposed to be pretty brutal and wound vs. the target's Armour Save, but those are still rumors at this point. From what I heard, a unit of Centurions armed with Gravitons really tore it up in the Battle Report.

Below we finally have a picture of the Space Marine Hunter and a better picture of the Space Marine Stalker. Both of these look really awesome and I can't wait to add one (or two) to my collection. I have to say, I really wasn't happy about the allies rules when 6th Edition was released, but now, I have some options for my Blood Angels that I normally wouldn't have until the next Codex rolls around so that is definitely a good thing. 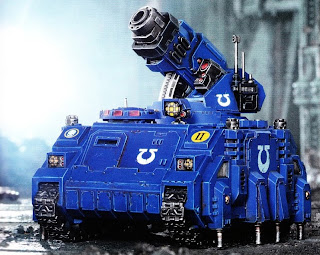 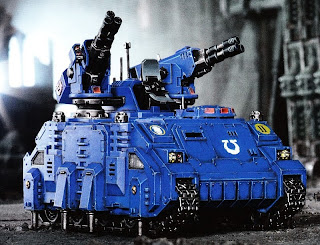 Here is another pic of the Space Marine Centurions. These look like the Devastator variety and are a lot better than the assault version in my opinion. Still not crazy about the legs and that cod piece armor, but at least now they are starting to look workable. Really curious what the rules on these will be. 2 wound Terminators? We'll have to wait and see... 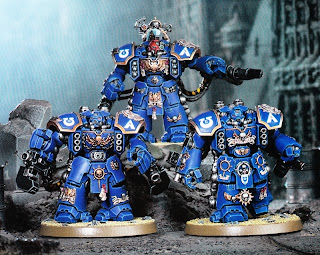 Here we have the first pic of the Sternguard painted up as Black Templars Iron Hands. Notice the new weapon which I'm pretty sure is the new Combi-Graviton Graviton Gun. Word on the street is Black Templars are in the new Space Marines Codex. I believe this is just a stop gap measure for them like a White Dwarf update and they'll still get their own Codex down the road, but that is just speculation on my part. I know the interwebs are currently awash with the cries of dismayed Black Templars players, but I wouldn't be pushing the panic button yet. Look to the Emperor Battle Brothers, all is not lost yet... 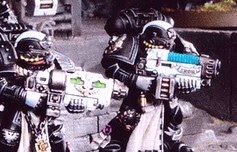 I saved the best for last! Here we have the new Vanguard Veterans. This looks like a great kit. A lot of the helmet configurations we have seen before with the Death Company kit, but it'll be good to see them more prevalent on the table top as they look awesome. There are some pics of some of these models assembled and what is left of the sprue here. Definitely going to get one or two of these and add them to my Blood Angels. 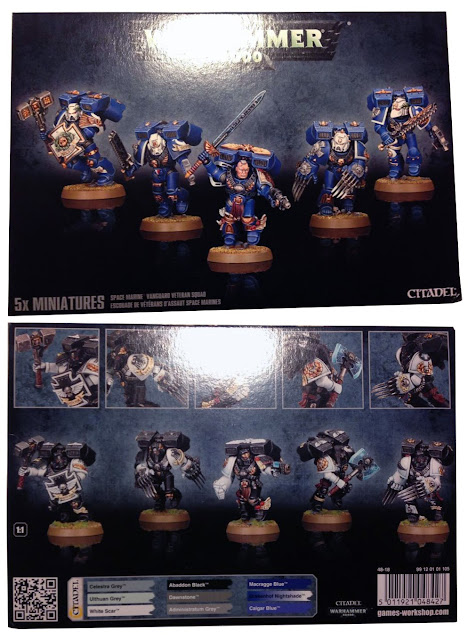 That's the bulk of the Space Marines release expect for the new Tactical Squad and better pics of the Sternguard Veterans. I'll post again if I come across them.

EDIT: I almost forgot, Robin Cruddace is supposedly the author of the Space Marines Codex. Not too happy about that as I love Matt Ward's work (feel free to flame me in the comments section). I think the Tyranids were an abysmal failure and while the Imperial Guard stood the test of time, that Codex has a lot of issues too. Jeremy Vetock said that after the Lizardmen Army Book, they were changing up how these books were written and were going with a Design Team headed by Jervis Johnson which is a really good idea. Maybe the Space Marines got this treatment? Time will tell...

Till then,
–The Harrower