How to Rebase Miniatures

I've recently caught up with my freelance backlog having finished off some miniatures for Megacon Games MERCS: Recon Kickstarter. For those that are curious I included a pic below. If you pledged for the 3 Drone Minis add on, this is what you are going to get. I'm really excited to see how these turn out. I've done a lot of 3D models, but never anything that was produced as an actual 3D object that will make it to the tabletop. Once I get some copies of the production pieces I'll be sure to share them here. 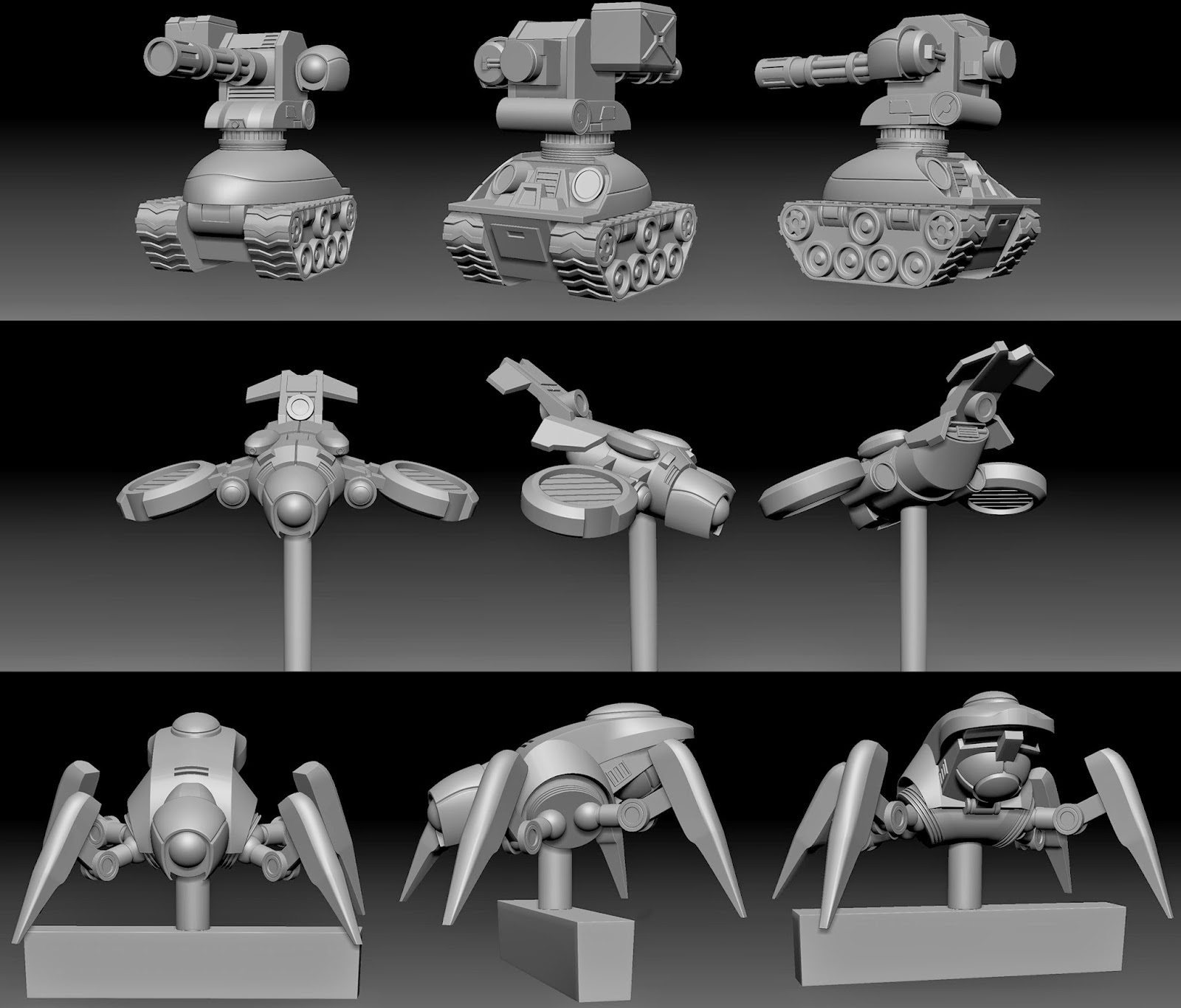 With this post I'm taking my blog back to it's roots with some much needed hobbying. Today, we're going to rebase one of my Blood Angels and give him a shiny new 32mm base. Let's get started after the break!

A lot of people online are complaining about having to rebase their armies saying it'll take forever. First off, you don't have to rebase your miniatures if you don't want to. Secondly, it really isn't that much of a big deal. I've seen people talk about using a Dremel and a Belt Sander, but you don't need to get that crazy. You'll be able to do this tutorial with the normal hobby tools and supplies you already have. This is all you'll need to get started:

If any Blood Angels players out there have Lemartes the Guardian of the Lost in metal, you know this model won't stay standing for anything. A slight nudge of the table and he topples over. I can't count how many times I've had to glue his jump pack back on or touch him up. So he was first on my list for rebasing.

Step 1: Take your cutters and cut off the rim of the base. Once you have that removed, cut off the slot (and in my case with this mini the metal tab). Try and cut this as close to the main base as possible as it will save you some sanding in the next step. I was pretty surprised at how easy the metal tab was to remove.

Step 2: Run the bottom of the miniature across your sand paper. I wanted to take a lot of material off so I didn't have a weird bump in the middle of the new base so I sanded until it was as thin as possible without losing the flock and stuff that was already glued on.

Step 3: If you glue it down to the new base now it's going to look really weird and you'll be able to tell that an older base was just cut and slapped on top of the new one and we don't want that. To make it look more natural use your clippers again and cut out an irregular shape. I worked around the initial base I had and made sure to keep the interesting features (skulls, rocks, grass clumps, etc.). You'll end up with something like this.

Step 4: Take some superglue and put it on the bottom of the base. Use a more generous amount than you normally would. Once you have the glue on the base work it all around on the top of the new 32mm base. A lot of people stick flock to bases with white glue. I prefer super glue as it dries quicker and the material stays on the base after one application. To keep costs down I just use cheap super glue I get at the dollar store.

Once you have your base well covered with super glue put a couple rocks (or bigger pieces of material) on the seams in 2 or 3 places where the old base meets the new one. What we're doing here is trying to fool the eye by breaking up the seam in a couple spots.

Step 5: Add some sand and wait for the base to dry. Alternatively, you can hit it with a couple spritzes of super glue accelerator. If you do this I'd recommended masking off the miniature with either a paper towel or a piece of cardboard as you spray. The spray won't really hurt the miniature, but it will make the surface oily and it won't accept future coats of paint or washes as well.

That's it! All that's left to do is paint the unfinished part of your base and the base rim and your model is once again ready for battle and sturdier than ever before. I'm missing some colors for my base scheme so I'll touch this up and show a final version in a future blog post.

This is a really simple method and maybe took me 20 minutes to do while taking pictures for this post. I'd imagine when I get more practice, I'll probably cut that down to  5-10 minutes per miniature. I plan on rebasing all my Blood Angels. Now if I can just find somewhere that I can actually purchase the bases without spending an arm and a leg on eBay....

Email ThisBlogThis!Share to TwitterShare to FacebookShare to Pinterest
Labels: Bases, How To, Tutorial