Blood Angels and all things... Mordheim?

In the coming weeks, you are going to see a bit of a shift to what I'm covering with the blog. Previously, I've been exclusively doing Warhammer 40K, but I'll be expanding to start covering Mordheim. Don't worry, if you read the blog because of the Blood Angels and like the tutorials and 40K material, none of that is going away. I'm just going to be sprinkling in some Mordheim now and then.

Why are you covering Mordheim? That game is like 100 years old.
Very true, but of all the Games Workshop games I've played, Mordheim is one of my favorites. It's easy to get into as you need a small model count and the integrated campaign system makes for some really memorable games.

I have a bit of history with Mordheim as well as I was one of the original designers on Lustria, Cities of Gold and I wrote the Dark Elves and a lot of other Warbands. I hear the collective groan, Dark Elves were so overpowered. Well, that is the type of stuff I aim to fix and really not that overpowered (unless you power game). Truth is I worked on Lustria with a great group of enthusiastic people, but they weren't game designers and most of the decisions that were made were done by consensus which is the wrong way to approach such things and resulted in decisions that I wasn't proud of. Here's a picture from Town Cryer of the first event for Lustria we ran back at Gamesday.

That's me in the middle. I was much skinnier back then with long hair and full of hopes and dreams. I met and talked to a lot of great guys in the Games Workshop Studio including Space McQuirk, Tuomas Pirinen, Jervis Johnson, and Steve Hambrook (RIP). I got a tour of the hallowed design studio, saw the amazing work of Jes Goodwin first hand, drank at Bugman's Bar, and was the first person outside of Games Workshop to see anything for The Lord of the Rings line and the Tau.

Thanks for the history lesson, but where is this going?
Right! Mordheim is a great game, but it is definitely showing it's age. Several editions of Warhammer Fantasy Battle have come and gone and a lot of the rules are outdated and the Warbands based on fiction that has been updated. My first goal is to be rebalance the ruleset and attempt to address some of the issues such as: 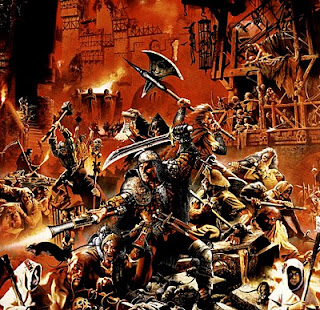 You do realize that's what Coreheim does, right?
I do and I have taken a look at Coreheim which I think is a well done rewrite of the rules. My problem with Coreheim though is that it is a rewrite and doesn't feel like Mordheim anymore. A lot of things were changed unnecessarily in my opinion and while well balanced, it invalidates a lot of existing fan material that is already out there. My goal with Newheim (catchy, huh?) is to address issues with the current ruleset without invalidating all of the existing material out there.

At the end of this journey, I'll be leaving the community with an updated ruleset for Mordheim that presents options instead of pigeon holing your choice to taking sword and hammer and scorning armor. Of course I'll update some of my favorite Warbands along the way including Lizardmen, Dark Elves, High Elves (NOT the Shadow Warriors, mine were never printed), Norse Raiders, and maybe I'll add some new surprises. I plan to set up a website at http://www.newheim.com where you will be able to download PDFs of all the rules and step back into the dangerous streets of Mordheim once again and experience something that is both familiar and new.