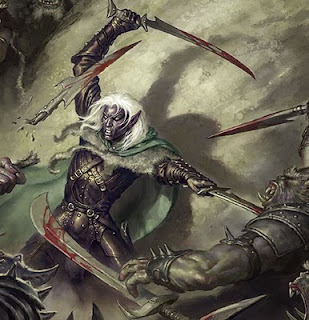 Want to start an incredibly long and heated debate? Go to any group of Mordheim players and bring up using two close combat weapons. Back in the day on the Specialist Games Forums this generated a ton of debate and pages upon pages of posts with varied solutions. Looks like this hasn't changed as there is a stickied thread on Tom's Boring Mordheim Forum that has 7 pages and 161 replies. The only topic I recall generating more conversation was Elves, and as the original designer on the Dark Elf Warband, that is definitely something I'll be revisiting in the future.

So what's the problem?
It's a few problems actually and one of the main issues with the game. Armor in Mordheim is too expensive and doesn't offer enough protection. This causes two weapons to become the de facto standard in Mordheim and choices which were better from a historical perspective, like sword and shield, are invalidated.

In order to fix this, we need to do a few different things and this is where this gets really tricky. First, we need to make armour better so its a more enticing choice. Second, we need to make using the classic sword and shield combination better. Third, we need to lessen the effectiveness of using two weapons. There are a lot of options out there and one thing that came up during the rules review was having both attacks at -1. Not a bad idea, but this swings the pendulum in the other direction and penalizes warriors when they get more attacks. 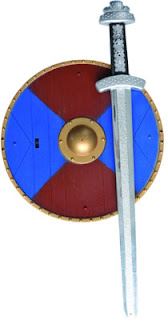 So how do we fix it?
Before we get into that, I just want to mention that my philosophy with doing Newheim isn't to rewrite the ruleset and spin this off into another game. I'd like to keep the changes as simple as possible and use fixes that are either recognizable or keep the game flowing smoothly. So while some of these rule changes won't be statistically perfect, they'll make for a better and more familiar game.

First, let's fix the sword and shield combination. A shield grants a +1 to a warrior's armour save vs. ranged attacks. When used in conjunction with a hand weapon (sword, hammer, mace, club, spear, or axe) the save improves to +2 against attacks in close combat. A buckler used in conjunction with a hand weapon grants a +1 save vs attacks in close combat. These saves stack with armour. Nothing new here.

Second, let's fix armour. In addition to the armour save bonus, a warrior with heavy armour can make a 5+ save against any injury suffered in the post battle sequence. Warriors with light armour can save against injury on a 6+. In addition, there are no longer any movement penalties for using armour with a shield (this will make more sense in a future post on jumping and climbing). Aside from the bit on no penalties to movement, nothing new here either.

Why did I go with this?
A -1 penalty to hit with both weapons is too harsh. You shouldn't be penalized for using both weapons as it's the additional attack that causes problems. Rolling at the end of the phase speeds up dice rolling as you are looking for the same number to hit and don't need to use different colored dice to differentiate a sword from an axe. Plus, it makes it less effective and more balanced with sword and shield.

I have been toying around with creating a new weapon property called Off Hand and letting those weapons strike in regular initiative order. This would primarily be for the dagger, but I'm not sure if that would make sword and dagger the preferred combo. Thoughts?

This definitely requires additional playtesting, but I am happy with the results so far. Speaking of playtesting, below are a few pics I took from the Mordheim set up we were using this past weekend to try out some of the new rules I've been working on. Click for a larger image. This scenery is probably over 10 years old and something I plan on replacing in the future, but it serves its purpose. 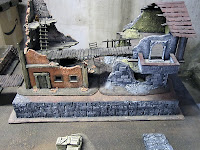 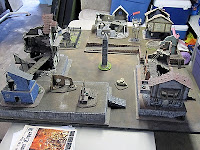 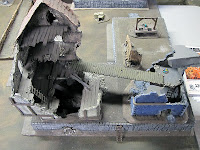 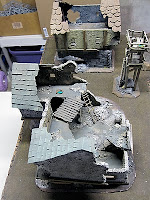 For the next Mordheim post, I'll talk about the problems associated with climbing and parry and describe how I intend to tackle those.