I've been all over the place with my hobby the last few weeks. For starters, I have been doing a rebalance on Mordheim called Newheim, painting and assembling my Blood Angels, and planning our first 40K Battle Report featuring something really cool that I don't think anyone in the 40K blogosphere has done before.

There was a great post by Miniature Tim on how to avoid hobby burnout. If I can give any advice, have multiple projects going on at once. When you get bored of one, switch to something else. Also, try to avoid too much hobby crunch time leading up to a tournament or an event. While those deadlines are good to get some serious work done, a lot of times you finish that last model and walk away from the hobby for a few months. Just look at my run up to the Doubles Tournament at Adventure Games. No posts for almost 2 months after and I didn't get close to getting done what I wanted to.

The painting bug has struck me recently and I have been working a lot on my Blood Angels. It all started at our recent Club Day with getting busted on how all my Land Speeders had no pilots so they couldn't move or shoot. I started assembling and magnetizing a new Land Speeder and I couldn't fully assemble it without painting some of the details. So I've been working on that, my converted Librarian, and my Death Company Rhino/Razorback. Here's some pics. 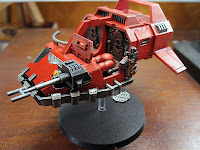 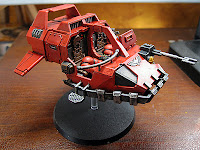 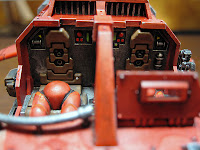 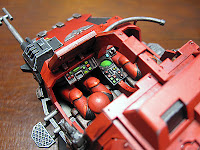 I'm happy with how the Land Speeder is coming together. All of the magnets are in except for the gunner. Don't fret, I'll have a tutorial on how to magnetize a Land Speeder in the future. My recent snag is trying to get transfers on the shoulder pads of the gunner and the pilot. My first experience with Micro Sol and Micro Set didn't end very well. Hopefully my next go will yield decent results. 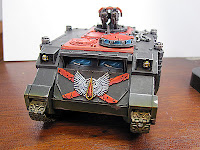 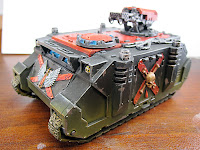 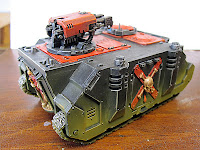 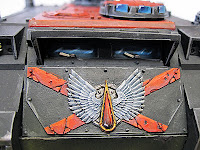 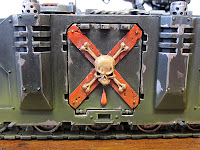 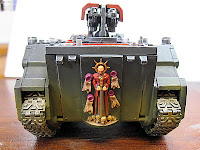 This is my Death Company Rhino/Razorback. I picked up an airbrush recently and the dust on the bottom half of the tank was done by spraying vermin brown. It still needs more weathering/battle damage and I'm not sold on the dust effect. The back door is a conversion I did. I figure the only way the Death Company would get back in the vehicle after the battle would be at the behest of Sanguinius himself. I'm not happy with the realistic painting of this. I'm going to redo it in aged bronze like I painted the Honoured Imperium. Tutorial and pics here. 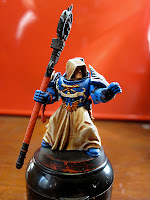 I got tired of being schooled by all the Psykers in Farseer Frank's Eldar army and one of my other friends recently joined the hobby and started playing Grey Knights. I figured I needed to do my own Librarian and aside from hating metal miniatures, none of the Librarians available appealed to me. This one is made from a variety of bitz. You'll see Death Company, Sanguinary Guard, Grey Knights, and Dark Angels parts on there. I'm thinking of changing the Warding Staff for the Flaming Sword from the Empire Wizards kit. Do you like it as is or should I change it up?

Not sure what I'll be posting next time as I just bought a bunch of tea lights to make some destroyed vehicle markers and I've been doing a bit more work on Mordheim. Who knows what the future holds?